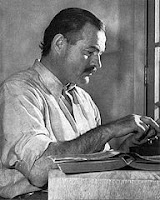 We all want to be better writers, am I right? But it's not easy. It's so hard to write anything at all that sometimes, once I've written something, I can't see ways to improve it. But there are ways to become better writers, one of which is to make our work easier to read.

That's where the Hemingway App comes in. It's a website I heard about designed to make your writing more clear. You can put in something you're writing, and it will judge it based on readability, adverbs, complex phrases, and passive voice. When the app finds any of it, it highlights them in colors for you to fix.


As an experiment, I cut-and-pasted in a paragraph from one of my works-in-progress.


I glanced around to see if anyone else was in range of my voice, but it was just the two of us in one of the many corridors of the mansion. There were more than a dozen other servants working in the house, including a butler, a cook, and one other maid besides us. But at that moment, we were mercifully alone.

I was shocked to discover the first two sentences highlighted in yellow, meaning they were hard to read. Really, I thought. They seemed fine to me. I also got dinged for using an adverb, which I hadn't noticed. At first, I felt annoyed, but then I decided to re-write it. I broke up the opening two sentences into smaller ones, and cut the adverbs. Here's the result.


I glanced around. I saw no one else in range of my voice. Just the two of us stood in one of the many corridors of the mansion. More than a dozen other servants worked in the house, including a butler, a cook, and one other maid besides us. But at that moment, we were alone.

You know what? It's better. It works.

But it's not perfect, and it's not a substitute for skill or professional editing. Language Log discovered that Hemingway's own writing failed the Hemingway App's tests. I think it's useful to point you in the right direction, though.

To hear about my new releases first and get a free book of fifty 100-word short stories, sign up here. Your email will never be shared, and you'll only receive messages about new releases.
Posted by Nigel G Mitchell at 6:45 PM