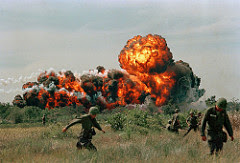 
First of all, what is napalm? Napalm itself is a brand name, not a substance on its own. The word "napalm" comes from the mixture of naphthenic acid and palmitic acid. It's a highly flammable sticky jelly used in incendiary bombs and flamethrowers, essentially gasoline thickened with special soaps. It's designed to burn at a specific rate and to adhere to surfaces to increase its effectiveness.

Given all that, the napalm recipes in Fight Club make no sense. Frozen orange juice wouldn't be frozen once it was set on fire, so you might as well use regular orange juice. Orange juice doesn't burn and isn't sticky. Diet cola might get you an explosive if you mix it with Mentos, but it won't do anything if you mix it with gasoline but make it taste better. Mixing gasoline and cat litter makes even less sense. Traditional cat litter is clay, so you might as well just mix gasoline with dirt and see what that gets you.

For his part, Palahniuk originally claimed all the recipes (including the napalm) are accurate but changed. It says so in his "official/unofficial" website:


Q: Are the recipes in Fight Club real?
A: They were. Chuck did very meticulous research and received some great notes from his brother, but at the last moment his publishers decided to change one ingredient in each recipe for liability reasons.

Later, he claimed that the recipe was changed by the movie:


Well, Ed Norton changed one ingredient in every one to make them useless. So, that really pissed me off because I really research those really well. Actually its styrofoam and gasoline - it make the most incredible explosive.

So he claims that gasoline and Styrofoam is the original recipe, but that ignores the fact that the orange juice recipe was in the novel first.

Gas and Styrofoam does approximately get you something like napalm. But he's still wrong, because the combination just gets you a sticky goo that will burn really hot, but is not explosive. It also doesn't explain why he uses two more recipes that were equally useless. Why include the recipes at all if they were so wrong? My guess? He made up the recipes or got them from someone equally clueless.

More aliens and planets lie ahead as the journey continues in Heart of the Nexus, part two of the Nexus Trilogy!!
Posted by Nigel G Mitchell at 9:38 PM