New Release: "Enter the Nexus" - Book 1 of the Nexus Trilogy

Today is the official release of my next novel, the first in a trilogy that will be released throughout 2018. Called Enter the Nexus, here's the cover and synopsis. 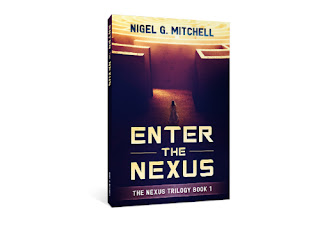 Shy librarian Brenda Martinez, tough cop Jack Taylor, arrogant businessman Wallace Carrington, and geeky teen girl Moonbeam Zhang were just living their lives until they were suddenly teleported onto a mysterious world. Facing terrifying monsters and bizarre aliens, they quickly discover they've been caught up in a strange experiment and the only way home is to go through a maze that crosses thousands of planets throughout the Galaxy. They'll have to work together to survive and uncover the secrets of the NEXUS.

Click here to buy your copy at Amazon.
You can check other online bookstores like Apple and Nook at Books2Read.

Already released:
You only know half the story of Jekyll and Hyde. Prepare to see literature's greatest monsters in a whole new light with Hyde!
Posted by Nigel G Mitchell at 8:00 AM